On the First Day of Christmas... 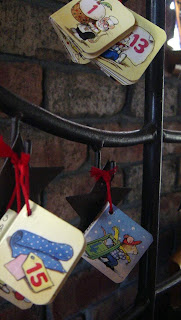 Not surprisingly there has been much discussion of Christmas trees, traditions and Advent calendars of late. This is our calendar.

Mum bought it for me when the Baby 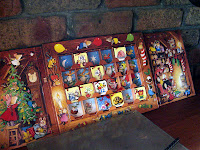 Angel was quite young and we established the daily ritual of taking each little book, reading it and hanging it on the wrought iron candelabra which used to stand on our hearth in the UK. Each book contains a little 'Mouse Tale' about Christmas preparations. In my fertile fantasy life I dream of assigning tasks to each day in December in order to have everything prepared and perfect for Christmas Day. This will never happen while I work. Or while one of the tasks includes snowball fights.

My birthday (15th...bottom left) is apparently the day for wrapping presents. There is a small flaw in this plan. I don't think I read the book on the day I was supposed to BUY said presents. 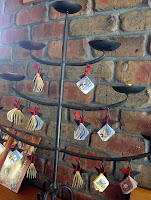 But never fear, we are on track now. Apart from a little trip into school today to move my office and pick up the curriculum for next year, we are FREE to 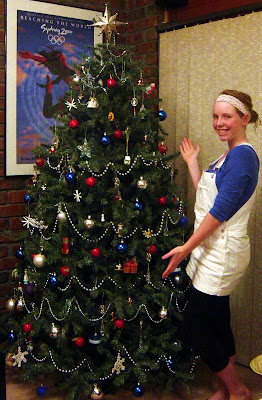 The tree is done; seen here, before the lights went on, the night we put it up. The tree is also a relic of our time in the UK and used to stand in my front bay window, twinkling at the street on the long dark Winter nights. One year I also placed jam jars with tea lights around the tiny garden and their magical points of light peeked out from behind the stark, bare shrubs and bushes. Lights at Christmas is such a Northern Hemisphere thing.

I still love handmade things though. This is the door wreath my Mum made the first year we were back in Aus. I had always made one out of fresh foliage in the UK (I had a beautiful hedge of some exquisitely scented conifer in my back garden; Leylandii possibly?) but here in the Eucalyptus capital if the world it didn't seem right. (I also didn't have a hedge). This one is made from scraps of Christmas fabric tied around a coat hangar and I LOVE it!! 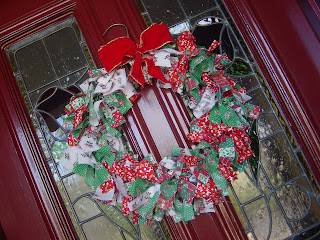 Another part of Christmas preparation for us is the Sunday School Nativity play. Ours was on Sunday just gone and was the first time anything had been done with the kids at Christmas for ages. There had previously been a wonderful woman in charge of Sunday School but after years and years she decided to step aside and from then on things have been a bit chaotic.

This year, as pseudo leader (no-one else wanted the responsibility) I suggested we reinstate the children's Nativity service and the idea was favourably received. I left the selection of play and organisation of children to another couple who have been at the Church for years (I am a relative newcomer) and who were rostered on for the week prior to the service. We discussed the need for simplicity and mentioned a tableau of figures in costume. I didn't think to explain what a tableau entailed. I didn't check to see if they had a child friendly script, indeed....any sort of script and I did not think it necessary to outline that actions should follow the words of the script before the children froze in their tableau. And so it was that we had a line-up of angels, shepherds, wisemen, virgins and camels similar to a police identification parade at the front of our church on Sunday.

"Yes, Guvnor, it were that feathery one there what led the shepherds in my employ to abandon quite a bit of expensive mutton to go orf lookin for babies! What's the world comin' to I ask you?"

May all your Christmas preparation be filled with the joy, hope, love and peace of Christ.
Posted by Arizaphale at 08:37

oh my! I missed your Birthday! Forgive me. HAPPY BIRTHDAY! :)

Merry Christmas, too. Your tree is beautiful! :)

Happy birthday! So glad you've finished out the school year and you can now prepare for the holidays properly. That calendar of books is precious - I love it!

going back a couple of posts, Baby Angel's hair cut is adorable - perfect for her!

Oh I love your calendar! I have never seen anything like it. YOur tree is gorgeous too.

Happy Belated Birthday to you!

I would love to hear the song you would have written - but perhaps you did "let it go" before you finished composing! : ) That was a funny tale and I TOTALLY understand why it left you churlish - she took the FUNNY out of it!

MERRY CHRISTMAS to you and yours.
Elisa

Happy Birthday! I have to ask - how do you feel about having your birthday so close to Christmas? Everyone always asks me, so I am excited to have someone else to ask!

And your decorations are amazing -- so fun and festive!!

Well, I feel kinda special cos it's 10 days before Christmas...not 9 or 11..but 10...seems significant :) But equally it is a pain because most people are busy with Christmas prep so its sometimes hard to get a party organised...birthday cards get lost amongst the Christmas cards....presents...actually I feel almost guilty for the plethora of presents :-)
When's your birthday then??

so much Christmas fun! It really works out pretty well that Christmas is during the summer there, so you're on break. But no lights?! It's not Christmas without lights.

I love your advent calander. I love your tree. I can definitely realte to not getting things accomplished according to "the schedule"

And last but not least - HAPPY BIRTHDAY!!! Mine was the 6th.