Labels: Aus culture, friends, night on the town, theatre
This is my best shot of the night! 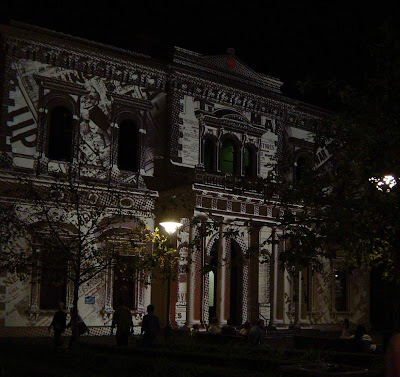 You have to click on this one and view it large because it is quite remarkable!

This is the facade of the State Library of South Australia, taken on Saturday night. Click this link to see what the building usually looks like! As part of the Festival, a company called Electric Canvas have designed lighting displays for the fronts of the heritage buildings along North Terrace in the centre of the city. Each building has been intricately mapped and slides of coloured and hand drawn facades are projected onto them. Actually, let the Festival Directory tell you about it.....

Celebrating one of the most beautiful cultural boulevards in the world for the duration of the Festival, the city’s historic architectural icons will be painted with light and coloured with life.

The State Library of South Australia, The South Australian Museum, The Art Gallery of South Australia on North Terrace are the sandstone cornerstones of our culture, illuminating and enlightening each generation. For two weeks, they themselves will take the spotlight every night of the Festival from dusk till 2am, the artists from the internationally acclaimed The Electric Canvas will transform their facades.

Through a constantly changing array of perfect, jaw-dropping architectual projection, reflecting the heritage and function of these beautiful buildings, Colonel Light’s 19thcentury vision will become a 21st-century vision in light."


There are 4 or 5 buildings illuminated and each one has about 5 projections upon it...I think. Anyway, LOTS. This young man whom I discovered on flickr has taken some gorgeous shots which reeeallly show what its like! Nevertheless, I took that one with my little PAS and I am quite pleased with it :-) 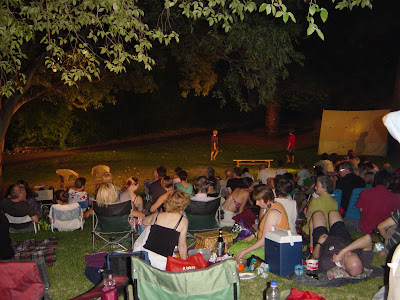 This was our other outing on Saturday night. We went to another Shakespeare; this time in the beautiful Botanic Gardens. The play was 'As You Like It' and like it we did although we were terribly hot. Of course. As you can see, by interval, the heat was getting to Mum!! 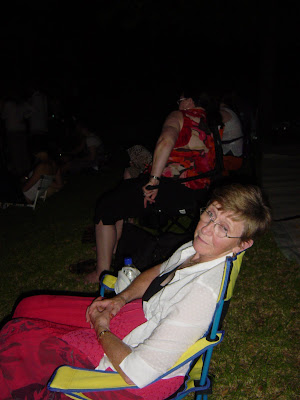 We were able to have a few nibbles and cooling quaffs to take the edge off the heat, well, off the stillness more than anything. It was stifling and made worse by the presence of large stage lights.

The only other downer about the performance was that the actors were not miked and were competing with a massive amount of background noise. Way over yonder we could hear the 'doof doof' of some band playing in the Garden of Unearthly Delights; the Festival had drawn out all the local petrol heads who were revving and careering around on a nearby road and the helicopter from the Adelaide Hospital kept flying in nearby to drop off its latest cargo of victims. Maybe that's what Mum's expression is about?

After the play, Himself and I made our way, accompanied by Kindergarten Friend, to the Persian Garden which is the after hours Festival Club. Unfortunately everyone else had the same idea and the queues stretched over a footbridge and off into the wide, blue yonder! We rapidly regrouped and went for a walk along North Terrace to look at the Northern Lights which were spectacular. 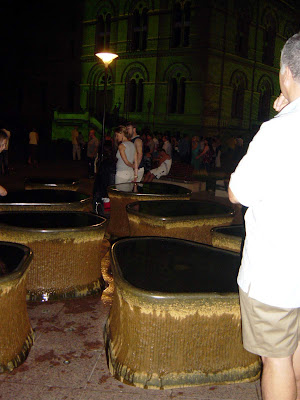 Here's Kindergarten Friend watching the lights change on the Museum (I think) in front of one of my favourite water features which is lots of little corals or bacteria shaped 'fountains' filled with water so they look like sheets of glass.....

We were sorry to have missed the Persian Garden especially as a friend of Himself's was supposed to have had VIP tickets for us. We had phoned him on approach to find that he only had 2 tickets and that we'd need to queue; this invoked our departure towards the other end of town however we underestimated his fervour.

Whilst I was taking this picture on the left, Himself received a phone call to ask 'where we were' in the queue. For some insane reason at which I cannot even hazard a guess, Himself neglected to tell him that we had left the queue area and focussed instead on the length of the queues.

(At this point I was looking at Himself with incredulous eyes!!!! He rolled his eyes in return.)

He then wanted to go back as he had not anticipated VIP friend actually coming out to find us in the queue but as it was evident he didn't really want to go into the 'doof doof' gardens, I volunteered to ring back VIP Friend and tell him a version of the truth. I explained that I was being a pushy wife and we just didn't want to wait in the queue so we'd come around onto North Terrace. VIP Friend said 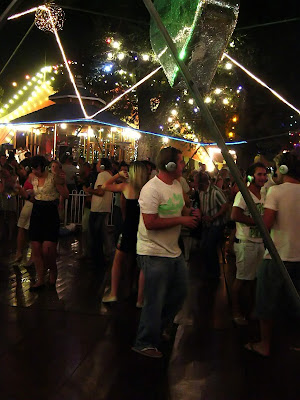 Himself was now convinced that his life was going to be made miserable by said Friend as we had been so ungrateful as to not queue for his VIP tickets! Kindergarten Friend and I were having none of it so we headed off to the Garden of Unearthly Delights at a brisk pace.

The Garden was 'working' as they say, with beautiful youth describing the age old courting rituals.
He: Geeez I'm sooooo drunk
She:( giggle) Yea....me too.....
(snog snog snog pausing only to come up for air and more beer)

We also saw one of the weirdest things (although Mum tells me its all the rage in London). There was a dance floor with about 50 people gyrating frantically upon it. Nothing strange there, except that there was no music playing! All of them were wearing headphones and listening to something being broadcast from a Mac Laptop in the corner!!!! From the outside it looked hilarious!!!!! Given the variety of rhythms and dance styles being performed, one could be forgiven for wondering if they were all listening to the same music, but apparently they were :-D In this picture there weren't so many of them but I don't know, maybe he put on a good track or something because within 10 minutes the floor was packed. I wonder how they knew he'd put on a good track? :-D

We did eventually make our way back to the Persian Garden, where the queue had gone down to one hour. At 1.30am I had to admit I was too old for standing in hour long queues, especially as I was the designated driver and not fuelled to insomnia by copious amounts of alcohol and illicit chemicals as many of the crowd seemed to be. We went home.

It was nice to have a child free night out on the town though, even if Himself is currently on the phone sucking up to VIP Friend and making his excuses all over again :-D

Check out Mother May I to see what other weekend images people have captured.
Posted by Arizaphale at 20:22

I LOVE that first photo!!!! So amazing!

to learn to do the links go here

I love the first shot of the library. Up close it looks like a paisley painting! :-)

Sounds great! It's definitely no fun to be the designated driver on a night like that, though.

Wow! That's incredible. This looks so fun... so much energy and excitment!

Hey, the headphone dancing thing is a brilliant idea - because then you don't have to hear the doof doof of dodgy dance music! I like it a lot. I'm starting to get excited about Adelaide - this festival sounds great - I guess we'll miss it though.

That is a beautiful shot of the library - what a cool building!

It's a gorgeous shot: I'm glad you had a good time.

That is such a cool pic! Sounds like such a fun time!

that first shot is just increible! Love the silhouettes especially!

Your picture for BSM is fantastic! What a cool thing to do.

hey iphones sound cool, and then you can adjust the volume, only thing is i'd get sweaty ears. Sounds like a cool night. it would be great to change the music that you cant hear and watch the dancing change. But drunk people wanting to talk to each other instead of yelling in a noisy club will lift up your headphone on one side and yell into it as they'll still be hearing the music and then snap it back down on your ear. Is it just me or do i sound like I am thinking of all the bad things?

Did you say "child-free"? Please define.

That is one fabulous night shot. Looking at the link photo, I would not imagine they were the same building.

I am so completely enthralled with what wonderful cultural things you have in Adelaide...Chris should be getting excited! What a wonderful (though dry) place to live!! I think the shots of the library are amazing...you are right, clicking to enlarge makes it utterly breathtaking. I can not imagine what it must be like to be there. The evening sounded like such fun...although the shot of your mom is priceless- I can feel the heat from here! Only someone who has actually felt a heatwave like that could understand her baked melting glimpse at the camera...I have had the same look on my face many, many times I am sure! About the silent disco...(that is what the daughter calls it) I would love to see that! It sounds so funny. The daughter goes to a four day music festival in Manchester, Tennessee called "Bonnaroo" and they have one there. She said you have to see it in person to see how cool it is...Great post!