Labels: Best Shot Monday, holidays, photography, sydney
Sunset on the Bradfield Highway: these incongruously modern apartments rear up from the depths of The Rocks, nestled away beneath The Bridge in a tumble of Victorian Terraces, rockfaces and stairs. For all their stark, concrete, geometric design they reflect a certain beauty as they catch the last light of the setting sun behind me.
This is one of my favorite shots from my trip to Sydney last week. To see what else is on offer, click over to Tracy's for Best Shot Monday. 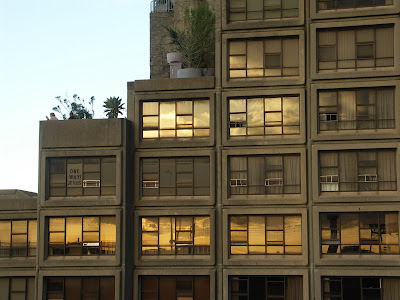 I wish I had thought to have my camera ready however, as I emerged from the aero tunnel in Sydney airport last Wednesday; my Baby Angel's face was a picture.

She had been lured to the airport to pick up a 'friend of Dad's' who was coming to stay from Canberra and was 'bringing her an early birthday present'. Because of this elaborate fiction she had absolutely no idea that I was coming although; after she had picked up her jaw and hugged me, she was still looking over my shoulder to see where dad's friend was with her birthday present!

We had a wonderful time together and were given space by her sensitive dad and stepmum to do some sight seeing together. First stop was 'The Rocks' one of the oldest and most atmospheric areas of Sydney, right under the south pylon of the Harbour Bridge. I wonder whose feet wore down these steps over the last two centuries? 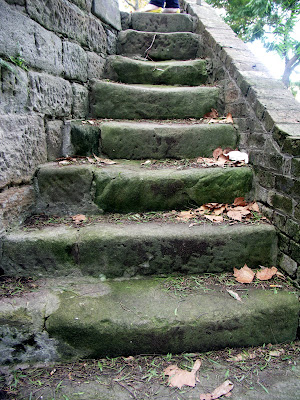 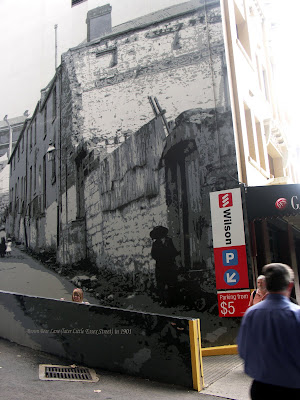 This is a mural depicting a street which was truncated in the 1930s by the construction of the highway approaching the Bridge. I thought it was wonderful for trying to imagine what the place would have looked like at the turn of the century. That's the BA peeking over the wall there.

We headed down to the waterfront and enjoyed the Autumn sunshine in front of the Bridge and the Opera House. The BA shot this one looking straight into the sun. It's had minimal processing! 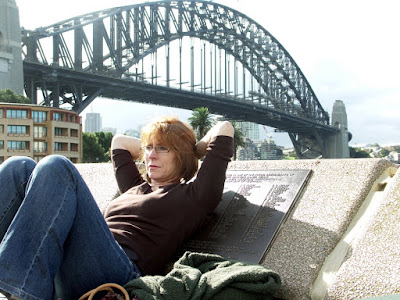 Here's my effort on her. I think she did better :-) 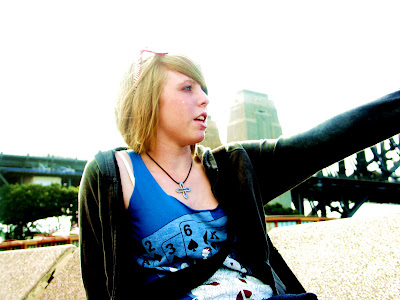 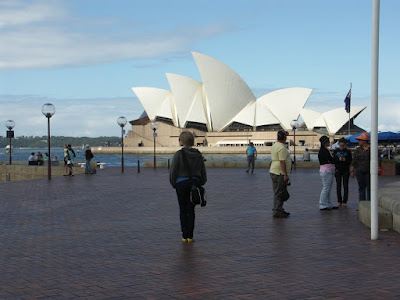 And so we kept on snapping. These are the concrete apartments viewed from the base. 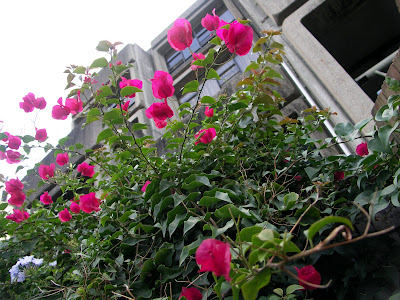 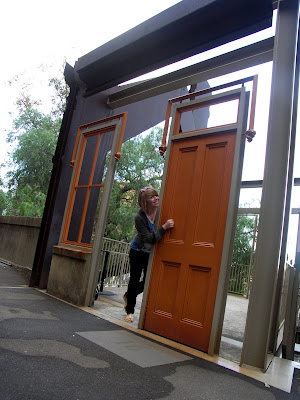 This was Himself's choice as Best Shot Monday. It's a wild sculpture depicting a row of terraced houses, torn down in the early 1900s. This part is at street level. 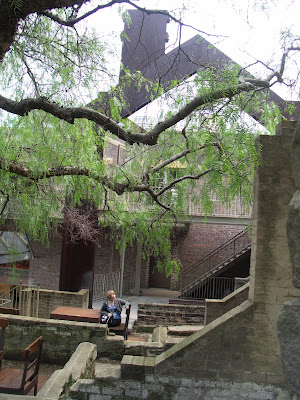 This is the same thing viewed from below street level. These would have been two story terraces and the part where the BA is sitting was the lower floor. The sculptor has placed large steel household objects throughout the ruins of the houses. 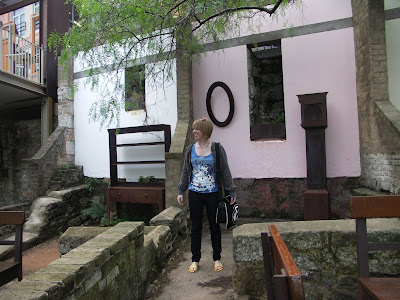 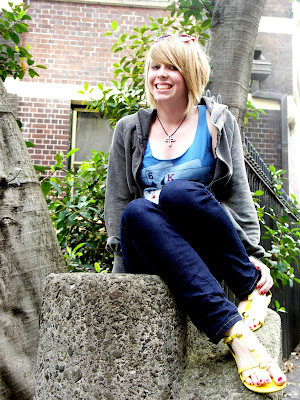 I loved the setting here at the top of a winding staircase. Checkout the toe/fingernails. The BA and her step mum had been for a mani/pedi thing earlier in the week :-) 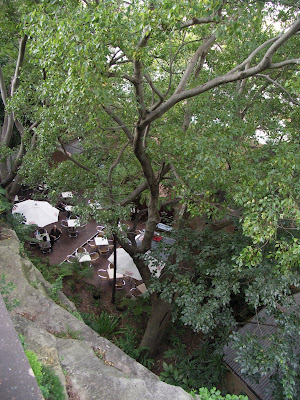 Peering down from Bunker's Hill over the rocks which give the area its name. I love the many levels in the area.

Being near the waterfront and the docks, The Rocks had a pretty seedy reputation in the early days of Sydney Town. 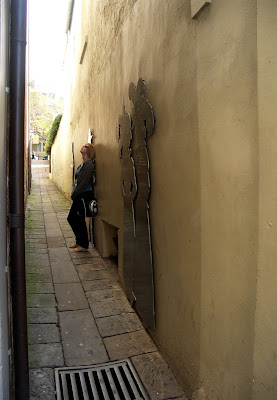 This narrow lane is called Suez Canal and was a place to be avoided for fear of the notorious 'Rocks Push'.

I often wonder what the inhabitants of that early version of Sydney would think if they could see the place now. I had a mild taste of it on Friday when I took the BA back to King Street Newtown to see my old Teacher's College. Basically, it was gone! Disturbing.
Still, if I was feeling bad, I could always sit on Bondi Beach admiring the surfers and the power of nature :-) 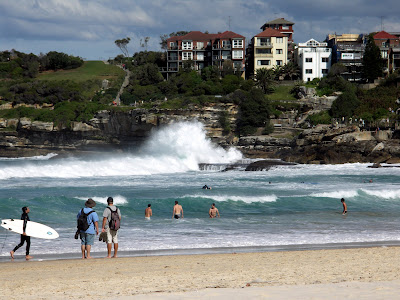 what a great trip, and some fab shots. my favorite is that first one with the light reflecting off that cool building!

What a lovely vacation. You (and B.A.) are so lucky to have such a warn relationship with her dad and stepmom. I love all the shots of B.A., to be honest. She's grown up so much in the few years I've been reading, and it seems life you've done a great job of raising her. It gives me hope!

Also, you're really doing a bang up job convincing me I need to come visit down under. I dare not show these pics to the husband or else we'll be on the next flight, and that isn't something I'd want to do with two under three and one on the way! Maybe in a few years...

Personally, I choose the shot of you for BSM. Looking good.

I didn't realise Sydney (or australia) had some old parts. I wanna come looksee now.

Oh wow, so many great shots! I love the ubiquious opera house shot. That is just so very neat and unusual. I love the history of the place that you captured here. Looks like you ladies had quite a nice time sight seeing!

Love seeing you girls in teh pictures, too. Too bad you didn't get a shot of both of you in one.

wow - I had absolutely no idea that sculptural thing was there when I visited in March 2008 - now I definitely have to go back!!!

Jill: Her dad kept referring to me as her 'present' the whole time I was there. Like, "So what do you want to do with your present today?"

Great shots. I want to go to Sydney now.

Funny that she was still looking for her present! Didn't you bring her one?

What great shots - it sounds like they went along with a great trip!

Great pictures, it really does make me want to go.

Have not commented in a long while...SO ridiculously busy with school, but I am taking a break right this second, and logged on to see what I have missed. WOW! You stay so busy, and this trip looks just fabulous. You are the best storyteller...I always enjoy reading your posts. Like Melody, I like your shot too but most especially the shot of the old steps. You and the BA do have such a lovely relationship. How nice of the dad and stepmum to make this time for you two. I am sure the BA will always treasure these moments. Thanks for sharing such beautiful sights!

Hope your transition back to work was not too difficult...I have gone in to school many a morning without a serious plan. Winging it is not always easy, but I hope you did alright. Well, back to work for me.

Great bloga and great pictures and a great daughter .Mom

Mom???? Are you kidding me? Since when have you been Mom??? You are my Mam! But thanks a lot for the love anyway lovely!
PS: blogger is splet with an 'er' I believe :-) Unless you are 15 an on facebook and then I guess you can speel just about anything anyway you WANT!! hahahaha

speel? splet?
I rest my case.