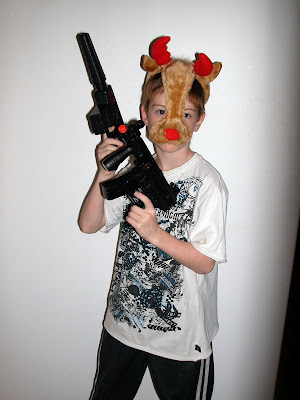 Does anyone else notice the interesting juxtaposition here? The reindeer carrying a machine gun?

We're having a party on Tuesday. It's not actually the BA's 13th birthday (until May) but a friend from Queensland is here this week for the school holidays and so we have taken the opportunity to have an early birthday party with a 'Movie' theme.

Guests have been asked to come dressed as actors/actresses or as a character from a movie. We will be setting them the challenge of working all the characters into one plot and filming the whole thing at the party.

I have suitcases full of old clothes for costumes and bizarre props. Himself has been co-erced into using his commercial movie-making skills to video the proceedings and make up a DVD which all kids will be given (later) as a momento. We are thinking of having a red carpet, Hollywood Walk of Fame Stars and gold sprayed Oscars as goodie bags!!! And all this within 24 hours.

What am I thinking?

Anyway, the Small Boy is here for the week and (much to the BA's chagrin: why does HE have to come?.... because he's your brother...) will be at the party. He has assigned himself my helper and has decided to come dressed as a reindeer. Of course. What else????

The BA has chosen Reece Witherspoon from 'Legally Blonde' and Saturday saw us combing the Op Shops for a suitably vile pink outfit. We found a few. The Small Boy was not to be left out.
"What about my reindeer costume? When are we going to look for that????"

With a vile pink dress and hideous pink strappy sandals purchased, I set my mind to the task of finding 'reindeer' clothes!! :-( 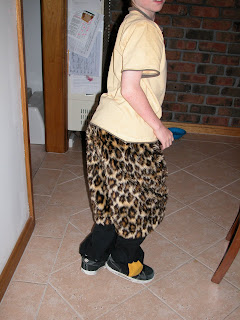 This is what we eventually came up with. Yes, I know they are leopard skin (or cheetah as Small Boy insists) but they are faux fur and he is happy with them. And they only cost me $3.00 so I am laughing. He hasn't had them off except to sleep and shower in the last 24 hours!!!! That's what I call value for money.

His father has pronounced them 'gay' but I admonished him severely saying that for a child as sensitive as this one, who spends so much of his time emulating older, idiotic siblings and who will normally not wear something unless it is 'skate' brand, happily playing a game of make believe is a wonderful thing. It's evidence of his still tangible childhood. Don't ruin it for him!!!!! Father grunted and rolled his eyes but said no more.

He also has a denim sleeveless jacket with fur around the collar to complete the ensemble.

Today we have been printing out Walk of Fame Stars and buying plastic ten pin bowling pins which we've spray painted gold to represent Oscars. Since there are only 10 pins and twelve kids coming, two are getting 'Golden Globe' awards. (The bowling balls sprayed gold.) 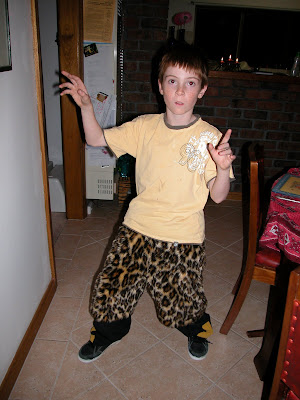 Tonight I am doing the infamous yearly cake as well as making some cupcakes and some savoury stuff. I don't know why I am putting myself through this kitchen hell but it is tradition and I kind of feel that your kid's party requires a certain level of involvement and the personal touch. I did buy party pies and sausage rolls however. I'm not a complete idiot.

This morning No2 Son and I had an argument over the party.
"Good parties don't need planning. They just happen. You shouldn't be so prescriptive about what you're going to do. At 13 they deserve to be left alone to decide what they want to do themselves."
"In MY house? I think not."
"When I was little we didn't go to these lengths to plan birthday parties. If I said we wanted a water fight we just had one. It just kind of happened."
"Yes, well, I like to plan theme parties. It's what I've always done." (not strictly true. For a couple of years we did 'Ice Rink' parties and 'Swimming Centre' parties and even a 'couple of friends at the movies' party!)
"Well, I think you are overplanning. Just let the kids get here and amuse themselves."
"How about you do parties your way and I'll do my parties mine?" (through gritted teeth)

Hop on over to Mother May I to see what others have been up to with their photography this week.
Posted by Arizaphale at 02:06

That is TOTALLY AWESOME! I seriously love those pants. I might even see if I can find myself a pair...I have a strange affinity for all things animal print (I know - fashion faux pax for sure)!

I can't wait to see pictures of the Legally Blonde outfit - and it sounds like it's going to be a fantastic party!

oh my goodness! those pants are priceless!!
i think the party sounds like great fun. hope you all have a wonderful time!

I've got to admit that I am NOT looking forward to kid's birthday parties. Attending or throwing. Hope that it went OK!

That sounds like it is going to be so fun. Was that her idea? So then Himself should then just be called the paparazzi. What will you be? Can't wait to see the movie.

If The Boy had wanted to attend the party dressed as Raggedy Ann, I would have let him. I think it's great (although annoying to his older sister) that he wants to be there and is actually showing INTEREST in what the rest of the family is doing, instead of his usually resistance act. I know it's so hard for you and BA, but in the end (when they are both grown), they (hopefully, HE) will appreciate the effort you put into his rearing (do you say that in Australia?? parenting, raising?). You are a phenomenal woman.

I'm so glad you like your cards. I do apologize that it took me 7 years to mail them across the great oceans to your post box. I also apologize that I haven't responded to your e-mail. It's still marked in my in-box awaiting a reply. With Meryt's illness(es) and the early pregnancy, I'm in survival mode right now. Only 5 weeks left of school and then a blessed break!!!

Good luck... sounds like you've got your work cut out for you. I gotta say that I kind of agree with no2son. Not that the kids should be allowed to do whatever they want, but at 13, they should be able to amuse themselves (right?) with supervision, of course. Please, remember, i don't have any 13 year old kids. :-)

Chris: Don't worry. We always made sure there was a adult friendly food ...and drink...for many years.
Hipmomma: Kind of hers and mine. I don't know what I am. Producer perhaps?
Natalie: No need to apologise. I know you've had your hands full.
Kim: You may be right. I'll let you know.

That is too funny!

I LOVE birthday parties!
Usually, I have done much more planning for the girl child's birthday festivities....crafts, nail polish, food, more crafts, more beauty things and more food! : )
The boys prefer to play basketball, run around outside like fools and then watch movies. (not to mention the constant intake of food). It never hurts to have a plan...if you veer away from it - no worries. But I feel better with a plan!
Cannot wait to see photos - sounds like a blast!
I think I am going to make note of Kim's comment and torment her with it when she does have a 13 year old! tee hee
We are friends and razz each other pretty good naturedly about raising our kids. My ace up my sleeve is that mine are older and it is going to be so much fun to sit back and watch when hers are my age. (said with a wink and a grin)

So, will we get to see the movie?
What a great mom you are to plan such a great party!

Will you come plan a party for me??? This all sounds amazing! I hope we get to see the movie - pretty please?? Love the reindeer costume, haha!

Nice to be visiting your blog again, it has been months for me. Well this article that i've been waited for so long. I need this article to complete my assignment in the college, and it has same topic with your article. Thanks, great share. Best Bowling Shoes