Labels: Annie, costumes, crafty tuesday, the musical
For Crafty Tuesday this week I bring you both my own craftiness and my overall crafty vision albeit made by someone else! Having said that, for many of these I did everything up to and including the cutting out and merely outsourced the sewing :-)

Firstly, the ubiquitous red dress! I am so disappointed that discretion prevents me posting the full photos as the young lady in question looked beautiful in both of these. 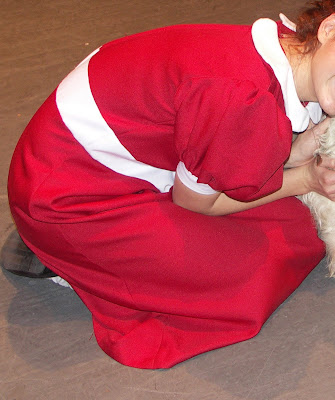 Yes, that is a real dog, and yes, it could have been a disaster; in fact, during dress rehearsal it was a disaster but by the first performance 'Annie' had mastered the art of delivering non stop 'treats' to our Sandy stand-in so that he sat solidly in one place, munching!

Here's a full length shot of the dress. See how I cut it wide at the front to cover her 'assets'? 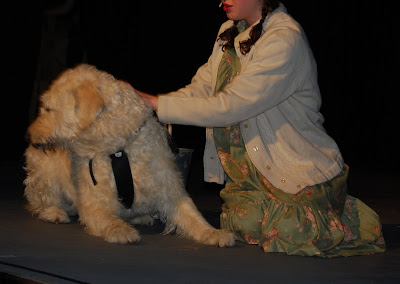 This is dress rehearsal shot of her first outfit, her 'orphan' clothes. Note the less than co-operative dog.

I've left the face in on this one as it is relatively obscure. This is Bert Healy the 'radio' personality from the 'Oxydent Hour of Smiles'. I didn't make this costume; it was one of many I assembled from our costume store but I think it came together well. She loved it! 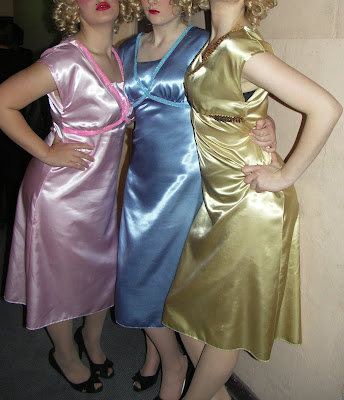 These young ladies were 'the lovely Boylan Sisters!' and they were one costume I didn't feel worked completely . This was partly because I had envisioned a pastel yellow for the girl closest to the camera but could only get gold in the fabric; partly because the ruffled sleeves in the pattern stuck up too much so we left them off but in hindsight I feel I should have replaced them with something else...a softer fabric maybe or a puff sleeve?; and partly because I left the purchase of the pink and gold sparkly decorations to someone else. The blue one I bought is ok, not great mind you, but I think the other two are way too gaudy. Oh well. Can't win 'em all. 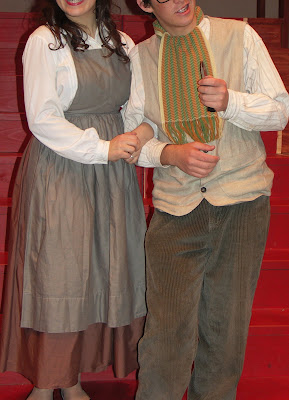 'Ralph and Shirley Mudge', the villains in disguise, were a good example of utilising what we had in the costume store but bringing it together well. 'Shirley' had more of a curl in her hair for the actual performance. I don't have pics of their first, more gaudy, outfits. Perhaps later?

Now a couple of group shots. I know their faces are 'in' here but I wanted you to get a feel for the set and I figure they're fairly small pics... 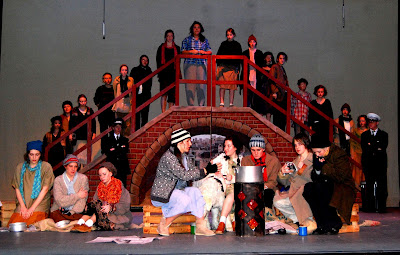 Firstly 'Hooverville'. For those unfamiliar with 'Annie', the story is set during The Depression when many shanty towns or so called 'Hoovervilles' (named after the President, Herbert Hoover) sprang up around the country as people lost everything in the stock market crash. I am pretty proud of this set as the design is mine. I didn't paint it, that was our sensational Art teacher, but the concept and original drawing were mine. I am a bit sad that I wasn't able to organise any 'lean-tos' on stage, and it was also a shame we couldn't stretch the production budget to include a data projector so we could project scenes onto the back cyc; still with the lighting (which is washed out here) it looked very shadowy and atmospheric.

I have to draw your attention to the hobo stove at the front there. It was designed and constructed by Himself and contained 4 torches suspended on wires with a whole bunch of red and yellow cellophane and aluminium foil. The overall effect, in the low light, was of flickering coals in an old metal stove. You don't get it here but I can assure you that it was VERY cool. Well done Himself!!!! 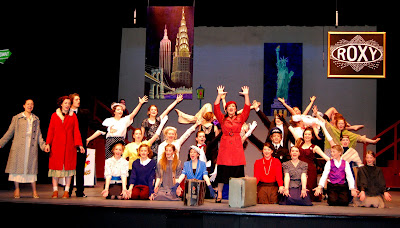 This was NYC, the showstopping tribute to New York City. Once again the costumes are a mix of outfits assembled from the costume store, items trawled from op shops and a few custom made jobs. The art work by our Art teacher was again a stand out. It made me wish we had commissioned more panels to fly in for other scenes but really, she gave up her holidays to paint these as it was!

Back to more up close shots; this is a scene in Daddy Warbuck's mansion. It is so sad I can't show you their faces as they are all so gorgeous and acting their little socks off here. We borrowed the blue and white costumes on the right from another school which had done 'Annie' before. I had planned for all the servants to wear these but as more 'best laid plans' were rent asunder, it became evident that only the smallest of our girls would fit them. The cook at the front is wearing only the apron from the original costume, the rest I cobbled together from our costume store. I think it worked. Anyway, as a result I had 7 men and 6 women to dress as servants. You can see three of them in the background. I had to cut out a range of sizes of those black dresses, starting at 10s and going up to 18s, as well as a number of black vests when it became evident that they are as scarce as hen's teeth in op shops. I also made the bowties in the same blue as the kitchen staff's dresses and bought matching blue ribbon for the female servants in black to tie around their necks. This is a dress rehearsal shot so I notice the girl behind doesn't have her ribbon on. I was really happy with the way these scenes looked especially since it was murder cutting out black gaberdine fabric at 2am!!! 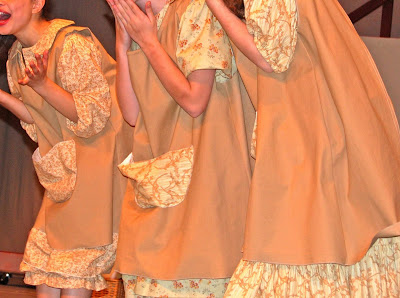 Finally, for now, a few more orphans. I really want to get a shot of them all together because I think the palette of fabrics worked really well. Once again it's a shame I can't show you their faces as they are really beautiful! The dress nearest to the camera is the one I made. I also ended up top stitching all the necklines on the pinafores to give them a better finish. 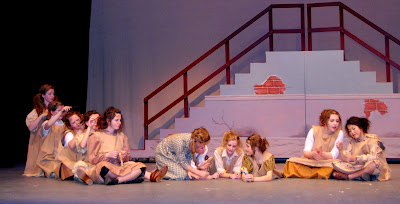 Oh alright, I couldn't resist a shot of them altogether with the orphanage 'set' in the background. That was my vision too although again I left the actual painting to far more talented people. I hesitated on including this shot because there are a few anomalies. It was dress rehearsal; the young lady in black leggings was told to get cream or lose them altogether and there is one lass with no pinny (another job finished on that all night stint).

So there you have it; a whistle stop tour of costumes and sets for The Musical 2009. To see some other crafty offerings, click over to Barely Controlled Chaos and see what other crafty bloggers have to show for Crafty Tuesday.
Posted by Arizaphale at 00:26

Great job on all of them! Wow, this was so much work for you and the sewists, but it looks really great! The sets were really nice, too. What a great group of teachers you have to put this all together (oh, and Himself, too!). :)

I am speechless. Holy cow.
They all look sooo fabulous! My faves are the orphans, the pinafores are just fantastic!

What an amazing accomplishment, Carolyn. Seriously...all that work, but it all looks SO FANTASTIC. You should be very, very proud. (Now go treat yourself and get some rest!)

No kidding holy cow. That is a lot of work!! And you are too critical because I think everything turned out fabulous. You really should be proud of all that work.

Awww thanks gals! You make it all worthwhile. And Yes it was an amazing group of teachers. *sigh* I miss it already.

Wow! Those look GREAT! You did so good! Are you going to sleep for a month now to recover? Cause I think you deserve a nice break!

Glad it all went well!

And teachers are awesome.

Will the Show ever make it to YouTube? I think so, with so many parents and cameras. Will the audio be lousy? - not if you had anything to do with it, I think. Love it all, and youse all

WOW!!!! Congratulations on EVERYTHING! That must have been so exciting!